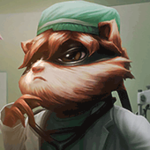 Doran's Blade
a much more fun none troll build

Blade of the Ruined King
a more viable 1 shot

you lose, plain and simple, she out ranges you at every point in the game and as soon as you get close enough she presses R and you die

ap so your armor is useless and she jumps in and 1 shots, the good thing is if you manage to 1 shot her first its not terrible, its a very ride or die scenario.

anyone who heals a lot and wont get 1 shot is a problem, fiora will also dash in on you though

By JohnScott32
the 1 shot build
I have tested what seems to give the highest damage output potential and there it is, if there was ever a possibility to kill someone with 1 auto it will be with this build, the big thing to keep in mind is you need to throw your lantern before an auto to active the passives on all your items, this build will in no way ever end well in my opinion which is why it has never been seen before people will 100% think you are trolling and they're not wrong. The important thing is that you get that one auto off that absolutely ruins someones day, after that you job is done. I was not able to test this build with ornn's upgrade but i did get high 2K damage in practice tool with it.

the second build is quite common and in my opinion the best thresh adc build with galeforce, but you can substitute items for example deadmans instead of bork. the reason rapid fire canon is not in the 1 shot build is because the damage is outmatched by essence reaver provided you throw your lantern out first, I had a lot of items that I tested and I realized that the 6 given items deal the most damage and with divine sunderer at full build you get 25% bonus magic and physical pen. which is perfect for thresh as he does both ad and ap with his auto, plus the on hit with throwing your lantern from it and essence reaver, then straight on hit from stormrazor with cheap shot the extra damage from tear the high possibility of crit with infinity edge bonus the collectors stats and 5% less damage required and the extra bit of damage from your souls on E passive, the extra bit from aery and all your extra ad from your runes. If you do not one shot someone with this build, it cannot happen, to get a lead with this build is kind of unrealistic but like just hope theres someone who built 0 tank and if you get full build we just might make it work.

the slightly more viable 1 shot focus' on being good peal for your team, your lantern with aery and cc. The way you play this is super aggressive, walk up auto walk away and recharge, this is good poke, and rapid fire gives you disengage with the longer reach and move speed increase. 1 option is to switch to deadmans or force of nature if things are really bad and sub it for essence reaver as you don't need the mana. deadmans gives a small damage boost and move speed making it easier to poke and force of nature is the same but you also get mr which thresh doesn't naturally get.
add on: When I had 100 souls, all 6 items and was 50 minutes in with baron buff and red buff and 4 infernal dragons and infernal soul 1 auto did 4365 damage to a practice dummy. Now I don't think you'll ever get there in a game but with a masterwork item and yuumi giving you extra ad you can make up for not having all the listed stuff.
I originally thought divine sunderer would be better do to the 25% armor and magic pen, but your damage max's out at about 3700 with divine sunderer and that doesn't cut it. The amount or armor and mr the opponent would need to have for divine to do more is high enough that you probably wont 1 shot them.

How to play
Dorans blade and pot starting item, first back pickup a tear, first item rapid fire canon (it’s not worth getting stormrazor to do 45 more damage) buy a normal pair of boots any time in this process. Then get duskblade, if you’re really adamant about building boots even though you’re gonna sell them later do that now, then collector or essence reaver whichever floats your boat, then infinity edge, the ladder of the 2 (collector essence reaver) and final item manamune. You will never run out of mana because you are building way too many mana items. Be sure to pick up souls when you can use an ability to activate essence reaver passive and you’re all set