Ferromancy - Crash Down / Mount Up (W) 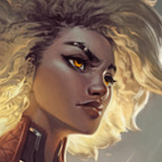 Similar to Taric with Samira.

Similar to Taric with Samira.

By Dingye888
Champion Insight
Im not gona talk about all her Runes and skills, yall should know this, Its on the page.

support that scales off AP. A lot of champions that are similar to this type are

Malphite etc. Since she is designed to be a

Alistar etc, supports that are not made to deal damage.

You sure want to build her tanky, but not to the point it's overkill. You want yourself not to get burst out but also providing some utilities that would help the team. Such as getting the

Sunfire Aegis to trim down surrounding enemies. It's about keeping your team alive rather than just yourself. (that also doesn't mean you feed) Sometimes the best defense is an offense. Your team won't die if there is no enemy.

Laning
During in lane, you would definitely want your

Attract and Repel first, that way it's better to set up for a level 2 all in. Maxing

Ferromancy - Crash Down would give more

Shield which helps you stay alive to engage first. maxing

Attract and Repel second makes it on a cd and more damage.

Ferromancy - Crash Down if you think you can either win the fight or gamble for a trade. This is risky as you would be slowed down and be out traded. When jumping in, try to position

Ferromancy - Crash Down further back, since it's easier for experienced players to dodge the skill, but your

Attract and Repel would likely still be in range to stun them. Key reminder, her

Ferromancy - Crash Down can be canceled with cc, so be cautious.

Another way of engaging is to use ferromancy - mount up. This skill gives a periodic move speed and puts her status to mounted which also gives her extra move speed. if she was also chasing an enemy champion, there would be a bonus [move speed]]. Now during a short-timer, your next auto is reset and can flip the first enemy back. This means that you don't always have to be in a mounted status.

During ganks, you can either

Attract and Repel for the stun. Always keep in mind that the enemy might just go all-in on your adc, so keep that in mind.

After hitting level 6 and getting the

Magnet Storm you can perform some mini combos with your kit, such as casting

Magnet Storm during your

Ferromancy - Crash Down to pull enemies in for a guaranteed knock up.

Rell is extremely well with adc that have good mobility. This means that your adc could catch up on your engages, since

Rell is extremely good on follow-ups too with

Attract and Repel and

It's even better if your adc is

Samira or has a similar kit. When she dives in with

Wild Rush you can

Attract and Repel to instantly stun on the focused target. Your

Magnet Storm is a very good combo when

Samira is about to

Similar combos would include

Lucian incase of going far too aggressive which leads to no peel.

Attract and Repel gives a passive armor or mr which is very useful on squishy adc but has an agresive kit.
Summary
As a

Braum main myself, I would definitely use her in ranked games if engage tank support is most needed. I would say she's a safe pick from all tank supports.

Rell has a little bit in everything. Some key aspects I like are her Move speed, gap closers, enough cc, and better at aiding the team as a whole.