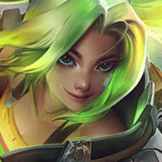 her range is pretty scary and actually getting close enough to output solid damage makes it incredibly easy to get blown up if you don't play the fight perfectly.

she abuses lethal tempo probably the best out of any adc right now, and her kiting will likely make it hard to even touch her let alone kill her.

he has a similar style of play with his dash and weaving autos, but his chemistry with enchanters and tank supports alike will make early trades difficult if you're not careful of his sidekick.

By King Turtle
Build Introduction
This build is what I found to be the most successful from my experience in the PBE and testing different options in the Practice Tool. Therefore I am making a mobafire on it to share with the community. Hopefully you have some fun times with this guide and enjoy it enough to upvote it. With that in mind, let's head into the rest of the guide chapters.
Pros And Cons
Extremely Versatile: Zeri is a champion that can run a varying amount of items and runes while still being effective, due to her mixed scalings and her bonus stats on her Ultimate and interaction with most keystones in the game.
High Mobility: Zeri has a pretty standard dash similar to Lucian’s, except it can also be used like Talon E to traverse terrain and get in and out of any fights or chases that you need to.
Smooth Combos: Zeri has a special feature that certain champions like Lucian favor heavily, and that’s being able to combo her abilities and attacks together pretty smoothly to maximize the use of her damage and utility. This is what separates a good Zeri with an amazing Zeri. If you can maximize your combos you will be a monster.
Horrible Early Mana: Zeri’s mana pool early game is pretty weak, and the cost of her abilities don’t really help her case. The only upsde is that her Q has no cost so if you can avoid E spamming and trying to poke too much you can likely manage the mana issues, but for now it’s just not good.
Extremely Squishy: She is squishy, I mean like Kindred squishy. She’s incredibly easy to kill if you can get the jump on her, and unless she is able to burst you down in a few seconds there’s a good chance she’s going to be in trouble.
No obvious strength: The one biggest issue with Zeri so far is that despite being able to run 5 separate build paths(on-hit, AP, lethality, crit, mixed) she doesn’t have a path that absolutely, 100%, stands out from the rest and screams that it’s the best of the 5(so far).

Conqueror imo is one of her best keystones as her Q range, spammability, and her knack for weaving abilities in with her Q “autos” makes stacking Conquerer pretty easy, with her R and E amplifying her abilities further, making it even more worthwhile to stack Conquerer.

Triumph is going to be good for Zeri as she’s pretty squishy so getting health back will be nice to make sure she has less of a chance of getting blown up later into fights. Combined with Collector passive it also gives some money incentives.

Alacrity will be an added touch of attack speed to boost her brrrt power in her kit.

Whether this was intended or not, Zeri is one of the squishiest champions ive ever played, so cut down just makes sense on her. It’ll pair nicely with Lord Dominik’s Regards as well.

Sudden Impact is a perfect rune on her because her E can be used for a ton of different engages and actions which should boost her power even more and make it easier to kite enemies to death.

Ravenous Hunter will add some healing to the build and help you stay alive in fights since we don’t have any lifesteal to keep us sustained.
Abilities
Basic Attack
Passive: Zeri gains charges by moving around the map and whenever she casts

Burst Fire up to a maximum of 100 charges. She also gains full charges at the very start of a match and every time she respawns.

Innate: Zeri absorbs any shields that she damages, shielding herself for 60% of the damage dealt to the shield for 3 seconds, and gaining 10% movement speed for the same duration.

Passive: The slow effect on Basic Attack gets stronger every time you rank up Burst Fire.

Active: Zeri fires a burst of 7 shots in a line, dealing physical damage to the first target hit.
Burst Fire is treated as Zeri’s auto attack, costing no mana, and applying all effects that an auto attack would. The cast time and cooldown of Burst Fire scales down with her attack speed and 50% of excess attack speed is converted to physical damage.

Active: Zeri fires electricity in a straight line, dealing magic damage and slowing the enemy hit. If the laser goes through terrain, the range increases, and the hitbox widens considerably. The laser also grants sight of the area hit for 1.75 seconds. This wider laser also slows the enemy hit.

Active: Zeri dashes, energizing her next 3 bursts of

Burst Fire for 6 seconds. The 3 empowered bursts are able to go through enemies, dealing reduced damage after the first target hit, and not applying attack effects to those hit after the first. This damage is affected by crit modifiers.
If Zeri activates Spark Surge on terrain, she will dash across the terrain.
Every hit with a charged basic attack reduces the cooldown of this ability by 1.5 seconds.
Spark Surge is also an auto reset, and resets the cooldown of

Lightning Crash can be cast while Zeri is dashing.

Active: Zeri discharges a large amount of electricity around her in a circle, dealing magic damage to anyone in the zone. If Lightning Crash hits an enemy champion, Zeri becomes Overcharged for 6 seconds. She gains 3 stacks of Overcharge per champion hit, giving her 2% movement speed per champion hit. If Zeri hits an enemy champion while overcharged, she refreshes the duration by 2 seconds.
While overcharged, Zeri gains bonus attack speed, deals bonus magic damage on-hit, and empowers

Burst Fire to fire 3 rounds that are electrified and faster than the normal burst. These rounds deal bonus magic damage to the first enemy struck and anyone near them within your Vision. Up to 4 other targets can be struck at one time, and are dealt 25% physical damage. These attacks can crit and are effected by crit modifiers.
Kraken Slayer

Kraken Slayer is a solid mythic on her now that shieldbow got nerfed, and lethality doesn’t seem like the best option in comparison. The attack speed is great for her “Q” and since the bursts apply all effects that autos apply, you get the true damage on every 3rd burst. It’s her best mythic hands down and I doubt it’s gonna change any time soon.
Berserker's Greaves

Berserker's Greaves Give her more attack speed, and since we aren’t going AP we won’t need sorc shoes. Thus, we’re left with only Greaves to make our bursts even faster.
Essence Reaver

Essence Reaver is a solid crit item on Zeri because she can abuse the sheen proc extremely well, and since it gives mana back on sheen procs, we won’t need to get a manamune for her horrible early to mid game mana pool. It’s also on the lower end for gold cost out of the crit items available.
Bloodthirster

Bloodthirster is a solid lifesteal item with a shield attached to it for any healing you receive after reaching full health. It's a tad expensive but for the AD, crit, and lifesteal we get I believe it's worth it. With Zeri being so squishy I feel this item works wonders for her, especially with how hard to catch she can be. The better you are at kiting the better this item should feel on her.
Lord Dominiks Regards
Considering just how squishy Zeri is for most of the game,

Lord Dominik's Regards is a pretty obvious pickup for both crit and armor pen, as well as the additional % physical damage to champions with more total health than her. She’s already pretty solid for kiting, but with the empowered shots, penetration, and crit, there’s a good chance you can melt any bruiser or tank in the game if you play the fight properly.
Infinity Edge

Infinity Edge is a perfect late game item for Zeri as her “Q” bursts benefit from Infinity Edge’s crit damage modifier and the amount of AD you gain from this item is pretty insane. If you felt like your damage was lacking before Infinity Edge should be more than enough to put you above your competition and gain the ability to turn any enemies into mince meat.
Build Conclusion
In Conclusion, Zeri is very dependent on your ability to kite and adjust to her kit, and being able to make plays despite her squishiness. This build amplifies your bursts and makes it so most fights will only last as long as you need them to. I think this is a fun guide, and that zeri is an interesting champion who can be great in the right hands. I wish everyone luck with their ranked climbs and hope to see you on the rift, GLHF!