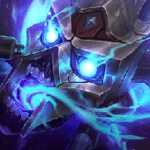 Becuase of Malzahars spell shield and point click poke it's hard to trade with him in lane. It's hard to land a combo on him becuase of his W. After 6, because of his point click ultimate, waiting for gank is probably your best option. Get Banshee's Veil second item in this matchup

Due to his high mobility, it's hard to land your E. If he uses R on you, use your R away from him to dodge his Q. Consider buying Zhonya's Hourglass first item to avoid his ultimate

Yasuo can be quite tricky. Because of his high mobility and windwall, it's hard to land your ablities. Keep a distance to him when his tornado is up. You're able to hit Yasuo with your passive through his windwall!

Due to his high mobility, it's hard to land your E. If he tries to E on top of you, use your R away to dodge it. Fizz is able to burst you very hard, consider buying Banshee's Veil or Zhonya's Hourglass first item (depending on the rest of the enemy team)

Hey, my name is Yadashi. I've been maining

Zoe this past season (season 8), i currently have a 62% winrate on her (76 ranked games). I started playing

Zoe when i was in high gold and played her all the way up to diamond 5, where i took a break from ranked. I Recently started streaming, so if you're looking for some tips n' tricks or if you have any questions, you're more than welcome to drop by. I'd be more than happy to answer any questions you might have :D Twitch.tv/Yad4shi

Feel free to leave a comment or PM me if you have any feedback or suggestions, that could improve the build/guide ^^

Ignite. The reason why i use

Barrier can be extremely useful if you're playing against someone with a lot of burst damage. Especially if it's someone like

Barrier kinda serves the same purpose. Both spells have their ups and downs.

Barrier has a shorter cooldown than

Heal and shields for more than

Heal is permanent while barrier is only for 2 seconds.

Cleanse is really strong if enemy has a lot of CC on their team, or if you're playing against someone that heavily relies on their CC such as

Teleport myself and i wouldn't really recommend it over the ones above. However if you absolute don't want to miss out on any farm, you like roaming and split pushing

Teleport is the way to go

Exhaust can be good if you use it correctly. I don't use

Zoe is a quite mechanical champion and can be a little hard to pick up at first. In this section i'll try to explain some of her combos and give you a few tips and tricks that might come in handy.

I made a video to get a better understanding of how the combos acutally work. I've left timestamps in the description with the different combos.
Just to clarify, when i say "AA" i refer to Auto Attack. So you don't get confused ^^

Q>AA>Q>AA
The first combo Q>AA>Q>AA is simplest one, it is the combo that you're gonna be using the most as well. You use this combo to farm, push and poke with. The reason why you want to AA in between your

Paddle Star, is to proc your passive

Q>Q>R>AA
The second combo Q>Q>R>AA or just Q>Q>R is kind of like a long range poke. The reason why you do this is to extend your

E>AA>R>Q>Q>AA
The third combo E>AA>R>Q>Q>AA is another poke combo. The reason why you want to use

Portal Jump in the opposite direction, is to get as much range on your

E>AA>Q>Q>AA
The fourth combo E>AA>Q>Q>AA is more of a burst combo. It looks like the third combo, just without

E>AA>Q>AA>Q>AA
Now for the last combo E>AA>Q>AA>Q>AA. It's pretty much the same as the fourth one, but with an extra AA in between you

Spell Thief (Zoe's W), simply because it's luck based. I cannot include this in the combo, i can however tell you how to use some of the spells you can get (or at least how i use them). This is pretty much only gonna be relevant to early game and for item spells.

Hextech Rocketbelt is probably my favourite spell early game. If you get

Hextech Rocketbelt early game (pre level 6), it's pretty much free kill. In lane your opponent will try to stay behind minions, to avoid getting hit by your

Sleepy Trouble Bubble. But with

Hextech Rocketbelt you simply just dash through the enemy minions, use

Sleepy Trouble Bubble and they're pretty much dead.

Redemption is extremely strong as well. Not only does it provide AOE heal, it deals damage to all enemies inside as well. If i get

Redemption on them. Enemy is not gonna expect a

Redemption heading their way so early on into the game. Which often results in some free kills/assists

Normal Summoner Spells
All the normal summoner spells, such as

Barrier etc. is pretty self-explanatory. You just want to use these spells as you normally would