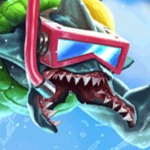 Boots
Finish Youmuus and get a zeal

Zeal
Finish the Shiv and your mobies

Wukong can all in you fairly early and take trades, once he hits level 6 there is nothing stopping him from one shotting you every chance he gets

Ryze's root can do some serious damage, since he still knows where you are if you blind him. He outdamages you too.

Darius is darius, but as long as you use your E defensively you shouldn't ever die to him unless he flashes.

The potential for him to outplay you with his windwall is pretty high, play passively.

He's Nasus so you win early game and lose late no matter what.

As long as you keep your distance you shouldn't be worried, but she can riposte stun you pretty easily off of your E, so don't E her.

Save your E to jump off of him to keep your distance, he'll never be able to kill you.

As long as you keep your distance, E off of her on her second q and you'll be fine.

He can burst you.

She will 100-0 you if you let her jump on you, do not play Quinn into Irelia

With preseason 8 hitting the floor in a splatter, most champions have had major changes to their gameplay for better or worse. Quinn is one that got much, much, much stronger.
Runes

To start off, runes reforged have significantly impacted every champions gameplay style and runes/masteries mean more than ever now. For Quinn, the Domination tree followed by Sorcery minor tree is the optimal way to go.

For optimal damage you can take electrocute, but I opt for predator as it allows you to do some major burst out of bird form and gives you a third movement speed active after youmuus.

Sudden Impact gives you a burst of lethality after you E, to get that extra little bit of damage in on those pesky adc's.

Eyeball collection is the real only useful rune for damage in the second branch of the Domination tree.

Since this build is all about the movement speed, relentless hunter is the only way to go.

In the Sorcery secondary, taking Celerity as Quinn is a must, when you get level 3 bird form you can get up to 300 bonus AD for that first attack out of bird form from this singular rune.

Gathering Storm is just for those late games where you need that extra 40 or so AD. Great late game and early for that bonus damage.

Finally, the items. Youmuus is a must. The movement speed active is killer on Quinn for both offense, defense, and moving around the map and the cooldown and lethality. Everything about this item is great.

Getting mobility boots might seem strange, but when you zip in at mach 5 and one shot the enemy ad carry or mid laner, it's worth it. You can also fly from lane to lane in about 5 seconds down the river, so you can split push all of the lanes at once.

Statik shiv for wave clear and burst damage, IE to follow for the massive critical strike to one shot the ad carry.

Bloodthirster for sustain, and finally a utility or damage item to finish and you'll be able to one shot anyone below 2500 health.