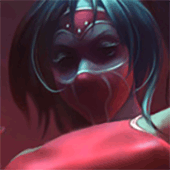 Qiyana Build Guide By Scyrine Updated on May 31, 2022
Follow

Welcome to my Qiyana Guide!

My name is Scyrine (or Josh) and I've played

Qiyana ever since she was released on the PBE.

Qiyana for me is a pick for when my team has a lot of AP and we need a good AD assassin with a lot of counterplay. She's a very fun champion to learn and play since she has a lot of outplay potential. In this guide im going to go over the items, some tips, and everything you might want to know to climb with

Qiyana is basically an all in one champion. She has a little bit of everything, CC, invis, damage, and swag.

Qiyana early game isn't really good. Until you get lvl 3 you're going to get abused by poke by mage champs in the mid lane. This is why bringing inspiration with corrupting pot helps with trades and sustain. When you have lvl 2 you should be able to poke back a bit with far Qs, but lvl 3 is when you can really do damage. Usually you want to go for trades and then use a corrupting pot right after


YOUR COMBOS FOR EARLY TRADES


This is usually the go to combo for damage in general, but once you hit lvl 3 in the early game you should use this combo to deal damage and then disengage. You can use your last W to get away and then Q for the final damage. You usually want to start with a different elemnt than the one your finishing with, for example, you start with the water element and then finish with rock

Qiyana midgame is when she's at her peak performance. You should already have a lethality item with tiamat, and personally I like to roam a lot when i get my lvl 6. There are a ton of combos you can do with

Qiyana R, but mostly you either want to use it as an engage. Remember, you can use

Qiyana R on terrain to catch up to an enemy running away, and then finishing them with your abilities. Her lvl 6 also allows her to tower dive a lot easier as it applies a direct CC when hitting terrain.

Qiyana late game isnt as strong as her mid game, but you still have potential to carry. You should be looking to engage AFTER your teammate engages in a teamfight. Your R could be a follow through and you don't want to get chain CC'd before you can launch it. You should look to E into the backline to kill the weak ADC and then shift back to the main fight.