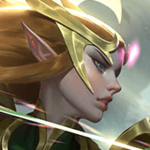 She's really annoying. I hate laning against Illaoi and I ban her nearly every game. She can bully you into your tower. If you find yourself against Illaoi, ask your jungler to come help you before she hits 6 because of her tentacles. If she gets ahead, be careful.

Take the "Cut Down" rune from the precision tree, it'll help with Cho'Gath's tankiness. As long as you can dodge his airborne ability you should be good. Poke him with W and you can get some health back if you need it in lane, and because he's tanky you'll get a lot of health :)

Piece of shit. Poke him down with W and once he gets low enough, bait out his Q and then go for the all in. Most of your damage comes from your auto attacks (Q) and if he blinds you, you won't get any damage off. As long as he uses his blind you should win the trade. Take red trinket and buy control wards after 6 to deal with shrooms!

For me personally he's just annoying. Bait out his passive then go for the all in. However, if he's running on all fours towards you, don't use your E directly at him because he'll fling you behind him and you'll be at the disadvantage. Take "Cut Down" to help a bit. Buy an Executioner's Calling to deal with his regen.

Can't say much, I never win against Darius unless he's actual trash. Ban him if you want to.

Whenever I lane against Poppy I always underestimate her damage! Stay away from the walls otherwise she'll push you in and you'll be stunned. Also be aware of her passive, it's a ranged attack. If she has it up she can poke you pretty well and she'll also get a shield to negate your poke, so wait for her to use it on a minion before engaging. Also let her blow her W before you try to hookshot onto her for the stun, as it'll completely block your E.

If you dodge his boomerangs and poke him with your W you'll be fine. Keep in mind that his jump has a really long cooldown at level 1, and so if he uses it to escape, follow up with your Hookshot and you'll be able to catch him. Again, take "Cut Down". Also, once he becomes mega Gnar stay away from walls. When he is about to become mini Gnar again, use hookshot and go for an all-in. It's usually a free kill if he doesn't have his jump. If he does, use your R to stop him from escaping.

How do you beat the dog? The answer is in the laning phase. Your early game is very strong. What I do is put a couple of points into W in the beginning. Poke him down as frequently as you can and then go in for the all-in. After a few W points, start max-ing Q. Sheen first back. Only try to trade once his R is down. Take PtA, Ignite and Cut Down, it'll really help you. Once he slows you, E out of his range - it might be a good idea to take the Tenacity rune so you don't have to buy Merc Treads. Overall if you survive the laning phase you survive the game. Shouldn't be too hard.

(OUTDATED GUIDE) Hello everyone!
My name is Loafy and my summoner name in League is Looafy. I'm currently Plat III in Solo/Duo and usually play normals actually; so if you only want help from a high ELO player then this guide is definitely not for you! I wrote this guide when I was in silver lol... so it's definitely not updated at all

I am making this guide to help beginners to Camille, and by no means is this a really advanced guide. Please remember that the best guide is practice.

Pros and Cons of Camille

Pros and Cons of Camille

Pros: + Scales well into the late game
+ Very fun to play!
+ A lot of damage
+ Slightly tanky/fair bit of sustain
+ High mobility
+ Even if she falls behind in the laning phase, can still do a ton of damage and contribute well in teamfights
+ Shreds tanks/armour with true damage
+ Very good splitpushing potential
+ Shreds towers

These are the spells that I'll take every single game as Camille.

Overall the best spell to take on any champion. You can engage, disengage, use it offensively/defensively and so on. Especially if you've used your E to engage and have to disengage, you can just flash out. There's nothing that can go wrong with taking Flash!

Teleport is a good spell because you can roam around in other lanes and get back into your lane faster if there's a wave pushing in for example. It's also good for splitpushing.
Ability Overview

I am not going to go too advanced into these, just give you an idea on what each ability is!

Essentially what this passive does is give you a shield equal to 20% of your maximum health whenever you autoattack an enemy. It's great for trading in lane, as your extra shield will give you an edge. It's also good in the lategame because it's percentage health based.

This is an ability which gives you an empowered auto attack which deals extra damage and gives you a short burst of movement speed on the first cast, and if you cast it within the next few seconds you can have another auto attack reset (with extra damage). However the most powerful part of the Q comes from waiting - if you wait about 1 and a half seconds before recasting it, Camille will do a backflip and deal true damage to her target!
In the lategame, her Q has a really short cooldown, meaning you can do tons of consistent damage.

Camille slices in front of her in a cone shape, and enemies hit by the outer part of the cone are slowed and are dealt bonus damage. Camille also heals for a little bit of the total damage. This is a great skill during the laning phase, as you can poke your enemy and also kill minions that are far away from you. Note that you can also move while casting the animation.

This is a really powerful ability. On first cast, Camille will leap towards a wall and hook onto it for a a short while. On second cast, she leaps towards a target area, and also leaps a little further to enemy champions. If an enemy is hit, they are stunned for a brief moment.
This is Camille's engage/disengage tool. You hook onto a wall and then off it to stun an enemy, then unleash your combo onto them. It can also go through terrain, meaning you can use it as an escape. Note that the cooldown is fairly long in the early levels, so if you blow it once and find yourself in a sticky situation, you're stuck!

This point-and-click ultimate makes you unstoppable and untargetable for a moment, and then you'll lock down onto an enemy and imprison them in an area where they cannot leave by any means. They can't even flash out. Especially in low elo where Camille isn't very common, you'll find a lot of flashes being used as they try to escape your ult, but they can't. However, if Camille either exits the area or is displaced out of it, the area will disappear.
Camille will also deal extra magic damage to her target.
Early Game (Laning Phase)