Ornn, Hammer Beneath the Mountain 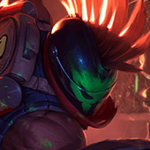 Call of the Forge God

As long as you build armor and pay attention to when he uses his abilities then you will be fine, but a single mistake can, and will, cost you top lane.

Do to her high mobility and being able to knock you back makes it extremely difficult just to get close enough for a hit.

Build armor and avoid bushes. Rare to be able to kill him on your own, but very easy to lock him out of CS.

If you give this Yordle an inch he'll take a mile. Regaining control of lane isn't too difficult, but is very time consuming.

Camille's abilities also revolve around the walls of the game, keep an eye out when she dashes off to the side and pop your E. You'll gain a kill 8/10.

Stuns, roots, shields, and drains. Morgana is guaranteed to be your worst nightmare in the game. Do not approach alone, but if you must then strike quickly. Her abilities can cause you to miss your Ult's knock-up ability.

Similar to Morgana, but at least Soraka is easier to take down on your own.

Once you complete one or two items Rengar is rarely ever a threat. Keep an eye out for him and land your combos for an easy kill.

Hello, I am here to be your guide to

Ornn.
It is important for you to know a few things. Ornn's power heavily relies on your choices during gameplay.

Living Forgeallows you to build items while in lane and if you build the wrong items you will be in deep trouble. Also Ornn lacks being able to deal sufficient damage from his base attacks and must constantly use his abilities to keep up.
Playing Ornn will require you to plan ahead and properly choose what to build in response. If your opponent's team is mainly AD then build accordingly, and the same goes for AP. One of the greater challenges is deciding what order to build even if you know what you'll need later on. This guide will, hopefully, assist you in making the right choices.

Sapphire Crystal. Refillable Potion is best because you will be unable to make

Health Potion while in lane and going back to get more will waste gold that would be spent on other items. The Crystal will provide you with some extra mana for early farming and trades, also being a key stepping stone into

Catalyst of Aeons.
Your first items bought should be

Ruby Crystal. After this point is where you must choose either to build

Bami's Cinder (best if against AD champ) or Catalyst (better against AP.) Catalyst can also be useful early on due to in being able to heal and regain lost mana.
However, if up against an aggressive AP champ, like

Heimerdinger then instead focus on

Abyssal Mask is often one of the first items to be built, followed by

Sunfire Cape and then

Boots of Speed should be purchased and built into either

Mercury's Treads.
If teamfights are impossible to avoid then build

Gargoyle Stoneplate to survive while being surrounded. Activating it will cost you damage, but if you apply brittle to enough enemies then your team should be able to finish them off.

Adaptive Helm are very similar and if up against an aggressive AP one of which should be chosen. If opposing team is mostly AD go with Visage for the rapid healing, but Helm will be useful against magic abilities being spammed constantly on you.

Vayne. High damage champions that are difficult to fight without a team.

Finally, when you get to the point of upgrading your items the two most recommended are

Infernal Mask. Cape is better for armor while Mask has magic resist.

Living Forge Allows you build items in lane, not including wards or consumables. At level 13 allows you and your team to upgrade certain items in Masterwork Items.

Volcanic Rupture Sends a fissure in the target direction and after a short time creates a pillar.

Searing Charge Dashes forward, dealing damage to all in the way. If Ornn hits a wall causes a knock-up to nearby enemy champions and minions.

Teleport will allow you an quick way to return to lane or travel across the map to compensate for your sluggish speed.

Flash is always nice to have.

Ornn is one of the greatest late game champs due to him being able to turn almost any team fight around.
Use

Bellows Breath to apply brittle to as many enemy champions as possible.

Call of the Forge God to slow and knock-up the other team to get your side a killing streak.

Ornn is still a new champion at this time, but is a lot of fun to play. Always watch for enemy ganks and don't be too aggressive. For most of early game it will much easier to stop your opponent's progress in lane than make progress yourself.

Ornn Jungle ~ Step aside Sejuani, Freljord is ours! [S10]
By Dreadscythe95

[10.6] Pickle Pick's in-depth guide to Ornn in the top lane!
By Pickle Pick