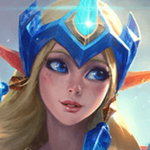 By semisomniac
Runes
There's actually quite a few ways you can build Sivir on ARAM.

Lethal Tempo is a pretty standard keystone to pick on ARAM marksmen because it can easily be utilized to max out DPS during teamfights.

Fleet Footwork can also be taken instead if you want more movement speed to kite and a little bit more sustain.

Ricochet autos off quickly to start off skirmishes and teamfights. The new

Dark Harvest is still okay on ARAM despite the recent ARAM-specific nerf and should be easy to proc with your W bounces, so that's also an option. But I do think

Hail of Blades is underrated.
(It's even been buffed again in a recent patch, synergizing further with Sivir's

Presence of Mind is actually necessary on every mana-using champ on ARAM, even after the ARAM-specific rune nerfs, so I take it over

Triumph. The sustain issue left behind by not taking

Triumph is then remedied by sustain from

Ravenous Hunter in particular procs off of both your

Boomerang Blade and your

Ricochet (not the initial auto, just the W bounces), which is pretty crazy. The recent buff to Bloodline is pretty nice, too.

Eyeball Collection is pretty nice because ARAM is bloody and it's easy to complete your collection quickly for the extra AD.

Coup de Grace is pretty standard on ARAM because it's a bloody mode and it's usually hard for champs to heal, so getting procs is usually pretty easier. Plus the adaptive stats granted upon takedown are nice (although that's getting removed).

As for the new stat rune slots, always make sure to start with the attack speed rune and the adaptive (AD) rune. You can do anything you want with the last slot. Maybe the MR one is good because a lot of busted ARAM champs tend to be mages. But any one of those final three will probably be useful in some way.

These are pretty standard

Health Potions is an acceptable start on any crit ADC, but I prefer

Caulfield's Warhammer because it builds right into

Essence Reaver. Alternatively, you can start

Zeal, but I don't think it's all that great—even with attack speed, it feels like you just don't have any damage. If you do start

B. F. Sword, it builds right into an

The last slot can change based on heavy AP threats (

Lord Dominik's Regards), or general want for more lifesteal and a shield (

ARAM is a bit weird not only because you can only buy items once you die, but also because the games are usually quite fast-paced.
I actually like starting

Caulfield's Warhammer to build straight into

Essence Reaver. With the 9.3 crit changes, that should always be your ARAM rush. After you get ER and finish your

Berserker's Greaves, you should buy a

Zeal because Sivir really wants the attack speed from it; before building it into a full

Infinity Edge. From there you can build the

Phantom Dancer and then either finish up your 100% crit (

Statikk Shiv or another crit item) or go for

Bloodthirster.
Things to Think About

Some things to think about:
Please track which enemies have

Mark/Dash. Sometimes that's literally the only way they can get to you or a low-health ally nearby. Dodging that can be literally game-changing.
If you start your

Ricochet with a crit, it will continue to critically strike all subsequent targets. Keep that in mind when starting teamfights! Also, if you do take

Hail of Blades, try to proc that and

Ricochet when starting a teamfight.
Your passive

Fleet of Foot is nice for kiting down the very long ARAM lane.

Sivir can definitely carry in this mode. Even if you're only playing ARAM for fun, I think it's pretty nice to win... so I hope this guide gave you something to help with that :P