League of Legends (LoL) Question: What to build against fizz as leblanc and what champion can counter fizz in 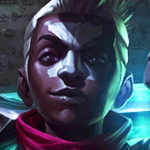 Abyssal Mask will mitigate a good chunk of his burst with MR and give you AP and magic pen, so it's probably your best bet as

Diana--she's super tanky with her

Pale Cascade so she's hard to kill, she has a ton of hard-to-dodge burst, and she's incredibly sticky with her double dashes and

Moonfall. She suffers in matches against ranged champs and pre-6, and Fizz is melee and not that great before 6. If you really want to pile-drive Fizz into the ground, Diana is your best bet! (Other options include

Fizz since Fizz's 1v1 damage output exceeds that of Le Blanc's, not to mention that he can just negate your short burst combos with a well timed

Playful / Trickster. But, if you insist on playing Le Blanc against Fizz then I would suggest getting

Chum the Waters, combined with

Seastone Trident, even an Abyssal Scepter would not do the trick. This is where Zhonya's comes in, approximately 1 second after the fish from Chum the Waters attaches to you, activate Zhonya's and you should be able to avoid Fizz's initial burst damage. Additionally, you would be able to spend at least 3.5 seconds of the 6 second period that Fizz's magic damage to you is increased by 20% (from Chum the Waters). After this it should be fairly easy to melt Fizz with your burst combo as long as Playful / Trickster is on cooldown.

Fizz's worse matchups in my opinion would be

Annie. I included Annie because Annie's

Summon: Tibbers has virtually zero cast time, combined with her passive stun, is exceptionally lethal at dismantling Fizz since avoiding the stun with

Playful / Trickster would be very difficult.
0

Lissandra are pretty strong against

LeBlanc should usually build an

Abyssal Mask if she's against a lane that she can't stomp with pure damage. Otherwise, I'd say buy

Morellonomicon first. But against Fizz you should ALWAYS go Abyssal.
0

Re4XN (59) | May 26, 2016 5:59pm
Pantheon absolutely destroys Fizz in lane, there is literally nothing stopping you from killing him over and over. Same deal with Kassadin.
Loading Comments...
Load More Comments