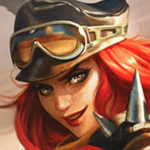 She can shield your E with ease and if you ever leap at her it will be a very easy snare for her. She can cs with her aoe so she rarely has to get close and as a result will rarely take damage from your E's passive. Try not to feed, farm where you can, and get ganks when possible.

Any champ with a strong shield is annoying, never go in with W if her snare is up. Ideally you get her to miss Q and throw her E at you, then you leap at her bringing yourself out of her E and bursting her while her cds are down, still far from an ideal matchup.

She is melee so a lot of potential poke from your E's passive. Her smoke cloud is very annoying, but when its down you have the advantage. One trick you can do when near tower is let her hit her E then W under tower after she starts her dash. A good akali probably won't fall for this.

A good zed is a counter to most things in the game. He has super high kill potential and can dodge your E with his ult. The only thing you have going for you is to W under tower after he ults you, but a good zed will just shadow swap out. My go to ban.

Not the worst matchup, go for boots early to help dodge his Q. You usually negate his passive with your E's passive, since its hard to avoid being hit by that as a melee champ. Pretty skill dependent.

She is low range, meaning you get a lot of free poke with E+aa and your E's passive. Still very skill based.

The fact that she has a refresh-able shield hurts your E pretty hard, but she is melee. You should beat her pre-6 and then be careful after unless you manged to completely shut her down.

Kled is not really a midlaner, but someone did run him mid against me, very easy lane. He has no real way to threaten you and your aa and E poke will stop him from being able to get any real cs.

By Yegie
Wat is this jank?
So basically this is not that great. This is not some hidden op gem and I would not recommend turning this into a main, or playing this in really important games or where the opponent got a really strong comp. That said this is a really fun build that can do some crazy burst as well as annoy melee opponents in lane.

People will not expect the burst you can do with just an e and a couple aa early and late game your ult can out damage a Veigar's. Your W range is huge which can surprise an opponent who overstayed on low hp. Your W's cd is reset if you get a kill or if you detonate a max stacks E. This allows you to jump in for a kill and jump out. Also allows to double dip on the W damage if the opponent lets you E > 3 aa > W > aa > W. The burst from this is massive. If you are low and can bait an opponent into diving tower your ult can deal a massive chunk of damage and knock them away from you and deeper under tower, often turning a losing fight into a free kill. The damage of your E is not front loaded, so an opponent will often overstay in an engagement thinking they have more hp than they actually do.

It is best to play this against a melee/short range champ champ that does not have a strong gap closer. Try to save last hitting until they come close to last hit a minion then last hit your own minion. Each explosion will give you free poke at the enemy that does not aggro minions. Most opponents won't play around this very well since usually those explosions would deal negligible damage.

If you want to turn this into an all in instead of a poke: after your E and getting 3 aa, W onto the enemy, pop E, W on them again, ult. If possible W slightly ahead of them so if your ult does not kill it knocks them away from their preferred escape path.

Random Notes
I am not sure if this is a bug or something I am not understanding about the mechanic, but sometimes, your E's passive part will not proc. It is very rare and I am trying to pinpoint exactly when it happens, but it does make this a little weaker.

I am adding match-ups as I encounter them a couple of times. As a rule of thumb anyone with a strong shield or really long range is gonna be a problem.