Having a blast with low ELO Gangplank 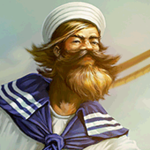 Right off the bat, let me preface this guide with the fact that Gangplank in is not the easiest champion to climb with in ranked soloQ. He has a generally weak laning phase and needs at least some team coordination to succeed, as a glass cannon carry or as a bruiser.

Like most high skillcap champions, Gangplank is great to play because his kit makes the game a lot more fun, especially when your opponent underestimates your ability to turn the fight!

If you do put the hours into really getting to know Gangplank's abilities and situational builds, it will pay off. After getting used to his powerspikes, baron plays, and combos even I managed to climb from Bronze to Gold ELO.

There are many guides out there already which can tell you how to play Gangplank in much higher ELOs, but this guide will be going over what I have found to be the most effective and enjoyable ways to play Gangplank from high Bronze to low Gold.

Gangplank is an exhilarating champion to play, and with such a unique playstyle there's always a niche in the meta where he can enjoy some success.

As passives go, trial by fire is exceptionally strong. The movespeed can be utilized for a hasty escape or as a way to stick to your target, much like the UNIQUE PASSIVE on

Phage. The true damage makes this passive a great tank buster too, making duels against champions like

Rammus possible at most stages of the game.

Be sure to reset

Trial By Fire by detonating as many

Powder Kegs as you can during fights. With enough attack speed, you can eventually get use out of a double-reset on

Powder Keg combos. This can be especially useful against towers, alongside

Sheen, to help you take advantage of your split-pushing potential.

But remember, this passive won't proc on non-tower structures (like inhibitors)!

Parrrley makes this champion a true swashbuckler. Last hitting minions and enemy champions with this ability will grant you a trove of bonus gold for your expensive item builds, and a few Silver Serpents to upgrade your

Sheen, lending the ability more damage and even some utility. This allows the ability to proc

Grasp of the Undying, making those keystone runes your best bet when designing a runepage.

Powder Keg can also be targeted by Gangplank's Q, giving him the ability to fight from a distance in risky situations.

In some lane matchups, you can afford to go wild with Parrrley and force your opponent out of lane while reaping in all the free money. However in others it's better to save your mana for the occasional

Remove Scurvy, make sure to Q as many minions as you can and hope to out-scale your opponent.

Staying healthy in lane can be an issue for most champions in League of Legends, but this zesty skill allows Gangplank to stick around for that little bit longer. The healing is amplified when Gangplank is at low health, so saving the ability for a surprise comeback is often the smartest strategy.

Remove Scurvy is a channeled ability and won't heal immediately. Leaving it too late might leave your team without their captain.

Remove scurvy also acts as a cleanse, so it's often worth holding onto until after the enemy use their stuns or debuffs against you.

Try to keep an eye on your mana pool, this ability demands a lot of it so try to make sure it's affordable and off-cooldown for when you need it most.

In rare situations, it may even be worth putting a Level-Up point in

Powder Keg. If you lose a Level 1 trade badly for instance, or are against a crowd-control heavy opponent:

Powder Keg is one of the hardest abilities in the game to truly master. There are many situationally unbeatable combos to be performed with this ability, but as this is a low ELO guide we're going to stick to the basics.

Parrrley to deal area of effect damage and slowing all units in that area. The keg will tick down in health bars, so hitting it early will not cause it to explode - think of it like last hitting on wards or creeps.

Powder Keg combos into a mind game during teamfights.

However, you can detonate kegs within the AOE of another keg's explosion, causing both kegs to explode and deal damage in quick succession.

This is what makes

Powder Keg unlike any other ability in the game. These chained combos are only limited by the number of barrels you can place.

It is even possible to chain kegs after you fire

Parrrley to deal essentially unavoidable AOE damage unless your opponent has

Flash. Placing the first keg in the fog of war can replicate this effect, and take enemy players by surprise.

Its free mana cost allows you to keep dishing out

Powder Keg combos in teamfights, but during laning phase it's much safer to allow your opponent to overextend to your tower and keep your

Powder Kegs until they make a punishable mistake.

Try keeping one positioned behind you at all times, ensuring that you win the trade if your opponent tries to fight you behind your minions. This also makes enemy jungle ganks easier to survive and escape, as detonating a

At Level 13, this ability will be maxed and you can begin to take advantage of its ridiculously low cooldown. Use this powerspike as an opportunity to force favourable fights and clear side lanes with ease.

Cannon Barrage is a global ultimate, meaning it can be targeted anywhere on the map. This makes it extremely versatile as a tool to enhance your split-pushing, finishing distant low-health enemies, or swing a teamfight in your favor.

Cannon Barrage may be negligible, but the huge AOE slow can make fighting much less comfortable for your opponents. One Silver Serpent upgrade to the ability even grants a movespeed bonus to your own teammates within the AOE.

Usually the most effective use of

Cannon Barrage during laning phase is as a ganking tool to assist allies in the mid and bot lanes, or to support a play for dragon. However, if you feel unsafe in lane you can always keep hold of the ability to deter enemy tower-dives against you.

Cannon Barrage will often let you go one-for-one if the enemy team does decide to fight you under tower.

Parrrley. Extra gold never hurts, especially on an item-dependent champ like this old pirate. Wards are always a bonus, and the free potions can come in clutch for those less forgiving lane matchups.

This is the keystone rune you'll be wanting to take most games.

If you want to beef up and brawl with the best of 'em, Grasp offers you some of that consistent healing you'll need. It also procs on your

Parrrley, so that makes it an excellent addition to your already fantastic kiting potential.

I would advise against taking this rune against ranged-heavy team compositions. Healing is great, but only if you can reach the fight to proc it!

Only take this keystone if you plan on buying some tank items to compound its strength.

A great rune if you don't fancy splashing out on those basic kicks. Helps you to save for some of those bigger items like

If you're worried about getting ganked and dived under turret, the stasis passive on this free item makes for a perfect counter. It also builds into

Guardian Angel, which is top notch on any mid-game Gangplank.

Easy money! Free, in fact. As the game progresses you are basically granted an overdraft, giving you easier access to all those juicy late game items.

A great option if you decide not to start with a

Refillable Potion. Another cheap way to stay healthy in lane!

Spam harder! The extra cooldown reduction on this rune can take playing against a decent Gangplank from annoying to oppressive. I would call this "The Fun Rune".

Fantastic synergy with both

Biscuit Delivery. The extra movespeed granted can even turn your potions into a handy tool for quick escapes and aggressive engages.

, you'll notice this rune mitigates a lot of damage. A solid pick for both laning phase and teamfights later on.

Doran's Shield this rune can help you heal damage faster than you take it. Poke-heavy lane opponents like

Gnar become a little easier when you can soak up that extra damage.

Coming out of your shell can be hard, especially before Level 13, but this rune gives you that extra boost to your damage making it that bit easier. And if you don't go on a killing spree? Well, free HP is never something to turn down.

Sometimes you just want a bunch of damage - well, this is the secondary tree for you.

Rumble is your new best friend.

Cannon Barrage can now be off cooldown for every teamfight, splitpush, and baron play.

Cooldown reduction is a vital stat on Gangplank, use this rune to cap it at 40% or go beyond and pick up the extra AD for a monstrous late game powerspike.

While this rune might not be a must-have in its current state, it still has synergy with the movespeed on

Trial By Fire and

A free DOT every 20 seconds can bring squishy opponents to their knees. Punish champions like

Akali at Level 1 for not starting

Don't get cocky, kid. If you think you can make it to 10 minutes with an inactive rune slot, take this to scale up to insane levels of late-game strength. Consider Gathering Storm to seal the deal late-game if you're confident you have no early-game win condition.

To be continued later in May...