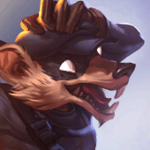 Warding Totem Removed
BACK (AHEAD)

Control Ward
BACK (BEHIND)

You can 1v1 him at any point in the game. Try to invade alot.

Ganking anyone that has a lot of burst is a good idea.

Ganking anyone, that can setup kills, so that Rek'Sai can get her W knock-up is good.

Ganking anyone that has a lot of burst is a good idea.

Ganking anyone, that can setup kills, so that Rek'Sai can get her W knock-up is good.

Warding Totem Removed
BACK (AHEAD)

Control Ward
BACK (BEHIND)

Locket of the Iron Solari
ELIXIR

Rek'Sai, it will help alot to understand this guide.

Press The Attack Hitting an enemy champion 3 consecutive times makes them vunerable, dealing bonus damage.
I would take this to burst squishies in the early to mid game

Triumph Takedowns restore 15% of your missing health and grant an additional 25 gold.
Triumph is a life saver.

Legend: Alacrity Takedowns on enemies grant permanent Attack Speed.
Since her ult doesn't give her Attack Speed anymore you will need this.

Coup De Grace Deal more damage to low health enemy champions.
I feel like this is the most useful one out the three options.

Transcendence Gain 10% CDR when you reach level 10. Excess CDR becomes AP or AD, adaptive.
You can try a fun build with this rune where you stack alot of

Waterwalking Gain Movement Speed and AP or AD, adaptive in the river.
Try to utilies this as much as you can by forcing the other jungler to fight in the river.
Ability Explanation

Creeping / Jungling
You can always take Scuttle Crab if you are low after Blue/Red.
Make sure to farm and gank right after eachother, so you don't waste any time. Like Farm, Gank, Farm, Gank.. And so on.
Teamfights
Summary

Rek'Sai is a very fun and interresting champion even more so when she got reworked in 7.11. If you have any comments, questions about my guide, please dont hesitate to ask any questions. Please inform me on why, and perhaps I can change any mistakes I have made.

Thank you for reading my guide. :)