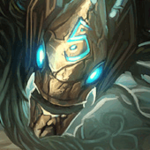 Hello, and welcome to my Skarnobe Jungle Guide! I am Halfafrocan and have been playing League of Legends since season 6! I got into League of Legends while in my sophomore year of college after a friend told me I should check it out. I became immediately hooked on the game and its competitive nature!


I peaked in Season 7 at Silver 1 Promos but went on a horrible losing streak that I unfortunately did not recover from. I stumbled on Skarnobe around mid way through Season 6 when I was in my, "let's try out some underplayed weird champs phase!" I fell in love and proceeded to main him for the rest of the season and held a 67% win rate!

As previously stated, I struggled in Season 7 and did not complete my goal of reaching Gold.I still however, had a 53% win rate! Season 8 was a lost season for me as I became fed up with the game and my play and quit playing for months and then started playing sporadically and casually for the rest of the season!

As stated above in the items section, Skarnobe is a versatile champ that can build whatever he wants so to speak. These 5 items however, have become standard for me in almost all of my games. You typically want to start with the starting items I have mentioned above and then work towards finishing your

as quick as possible! From there you are going to look towards getting your mercury tread's so that you can starting scooting around to lanes and ganking mofo's. After this it becomes preference and situational. So long as the enemy team doesn't have any really fed players you can 1v1 almost any champ, especially when in a

. So if you are doing well and want to keep the snowball going, go ahead and get that

and start wrecking. For the longest time this is what I would do in every game however, recently I have been having success going for

. I don't want to sound like a broken record and I don't want to make you read a wall of text, so i'm just going to say it one last time. Your build is your build and on Skarnobe it can be whatever you want it to be however, you should take into account what your team is lacking and try to address it. The best way to find out what works is to hop into a game and give it a try. Just consider making it a normal game if it is something that might be ridiculous, because nobody wants to deal with that in ranked!

As stated above this is by no means a Challenger guide but it is something cool that I wanted to do and share. This is just one potential build that you could try out on Skarnobe and have fun with. Skarnobe is my favorite champion in this game for all the reasons stated above and is a good try for someone looking for a new and exciting champ to play.

Skarner - Deadliest Sting Ever
By angata500