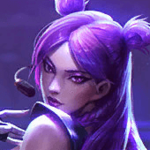 By SnipyOCE
Introduction
Welcome to my midlane Mage

Kai'Sa guide. This version of

Guinsoo's Rageblade and focuses on stacking AP to make her abilities hit like a truck. I recently hit Diamond with my Protobelt Kai'Sa build, all streamed at https://www.twitch.tv/SnipyOCE/
Feel free to drop by and ask questions! Follow me on Twitter here @SnipyOCE for updates.

If you want a quick TLDR of my Protobelt build and Kai'Sa combos, I made a short video guide here:


Which Build Should I Go?

The full AP build is harder to learn due to needing all the animation cancels/combos. However, it has a stronger early-game due to not wasting money on non-combat stats (such as mana). If you team needs a magic-damage threat, then this is the best build to go if you want to solo carry from early on.

The hybrid build spikes mid-game when you get both your Q and W evolves, but costs more gold and has no defensive stats (such as HP) early on. Your damage output will be around 50/50% magic/physical, compared to the 70/30% damage spread of the Full AP build. It essentially has higher DPS, but takes longer to powerspike.

For stat shards I go attack speed, AP, and either Armor or Magic Resist. I take an attack speed shard instead of double AP since it helps with general csing and autoattacking, and makes it much possible to take a small raptor level 1, but we’ll get to that later.
Item Build

What offensive item should I buy after Ludens? (in hybrid build)
Skill Order

For skill order you want to take Q

Icathian Rain level 1 and also max it first. It’s your waveclear and primary trading tool during early game since minions will usually block your W

Void Seeker unless you go for some flashy play or the enemy mispositions. Max W

Supercharge last, while putting a point into your ult whenever possible.
Combos & Animation Cancels

Here's an example where the W visual lags behind.

Well that’s the end of the guide, so go out and have fun topping the damage charts with my build. I’ll be updating this guide with more stuff in the future, but for now this should be more than enough information to give you a headstart.


Congratulations, you've made it to the end of the guide so here's a little-known secret that will 100% boost your Kai'Sa gameplay: