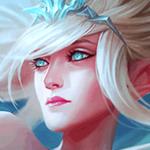 Warding Totem Removed
back to home

Aegis of the Legion

Locket of the Iron Solari
Other Items

his crow will kiss your shield

A litte bit hard because she can heal and poke after LV.6 make sure you have E for counter her R

A litte bit tanky but not too hard to fight

She will bully you in laning phase

2 of you are melee bully him by spam Q

1.You're CC support that's mean u're tanky so don't hide behind your ADC
2.Don't leave from your ADC until you and your ADC LV.6(Have Ultimate) that's you can roam
3.Make sure your team have good vision in mini map
4.If you want to roam make sure you can make kill or assist to that lane(don't feed in that lane)
5.It's a good thing if your ADC is your "DUO"
Pros / Cons

Winter's Bite each apply Concussive Blows to his target for 4 seconds, stacking up to 4 times. Once the first stack has been applied, any allied champion's basic attack on the target generates an additional stack.Upon reaching 4 stacks, the target is Stun for 1.25 / 1.5 / 1.75 seconds and takes 26 - 196 (based on level) magic damage.

Winter's Bite
Braum propels ice from his shield in the target direction, dealing magic damage to the first enemy hit and slowing them by 70% decaying over 2 seconds.

stand behind me
Braum dashes to the target ally, positioning himself between them and the closest enemy champion, gaining bonus armor and bonus magic resistance for 3 seconds. If his target is a champion, they also receive the same bonuses.

Glacial Fissure
Braum leaps into the air and slams his shield into the ground, creating a fissure in the target direction that deals magic damage to enemies as well as those around him.

A field of ice then remains at the fissure's location for 4 seconds, Slow slowing enemies within, persisting for 0.25 seconds.

Exhaust: when you face assasin in team fight such as Zed,Talon

Ignite: if you fight with sustain enemy or think exhaust is useless

Heal: when your ADC choose

Barrier
Why have to upgrade skill from this table?

Why have to upgrade skill from this table?

Q-main skill in lane
E-Use for protect
R-Good skill in team fight
W-Buff team mate but you have to stand in front them
Braum good to come with who and Why?

Braum good to come with who and Why?

Stand Behind Me(w)jump to your minion / ally
Team fight

You have the best muscle so you're front line use

Unbreakableyour sheild for save allies it's depend on situation
For some one who need his biography and his theme song (Credit: Riot)

For some one who need his biography and his theme song (Credit: Riot)

Blessed with massive muscles, and an even bigger heart, Braum is a beloved hero of the Freljord. Every child born to the ice knows of his legendary strength, capable of felling entire forests of frost-oaks in a single night or rending the very mountains asunder. With a colossal vault door borne across his back as a shield, Braum roams the land as a friend to those in need and a terrible foe of evildoers.
Credit: https://universe.leagueoflegends.com/en_US/champion/braum/
Braum theme song: https://www.youtube.com/watch?v=qHfDPCIn2HQ
From the writer

Thank you every one for reading my guide if I have somethiing wrong please tell me my English some word or some grammar isn't correct 100% because English is not my mother tongue
next guide I'll make it better I promist.

Facebook
Vote Vote
Think carefully, my friend.
Introduction
Support Guide (CC Support)
Pros / Cons
Ability explanations
Spell
Why have to upgrade skill from this table?
Braum good to come with who and Why?
Warding
Laning phase
Team fight
For some one who need his biography and his theme song (Credit: Riot)
From the writer