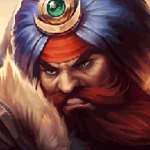 Blade of the Ruined King
Situational

Jax is Probably your biggest counter other than their entire teams CC because he will negate your damage with his E Counter Strike which means unless you can dodge with your E when the stun comes on or just wait it out you will lose.

Kayle is difficult mainly due to her ult, but if you play it right you can ult roughly at the same time and all can sort of be negated.

Teemo can be a bit of a problem but if played right you can beat him.

I am just a fellow Tryndamere player and love the character for all the cheese he brings and I felt like sharing my build and runes with you.

Tryndamere's gameplay is pretty standard E Spinning Slash to get close when ganking use your W Mocking Shout to reduce Attack Damage when ganking if they are turned around which they should be you get a slow, then just Auto attacking them till they die using ignite if needed.

There are different summoners you can take, such as ignite, exhaust and flash.

I have taken this from http://leagueoflegends.wikia.com/Tryndamere page on him

Bloodlust is Tryndamere Tryndamere's first and most important ability. Not only does it increase your lane sustainability, but gives you more attack damage plus a bonus in accordance to your missing health. In short, the less health Tryndamere Tryndamere has, the more damage he deals.
Given its passive effect, Bloodlust synergies well with Undying Rage, which prevents him from dropping below 1 health, giving him a massive bonus to his attack damage.

Spinning Slash's true strength lies in its utility. In addition to dealing damage, it allows Tryndamere Tryndamere to pass through enemy units and terrain, including walls and turrets, making it an incredibly useful ability.

If you're running low on health, head toward a wall and spin through it. The longer it takes your enemy to walk around the wall, the better. But if you're caught in an open field and can't reach a wall, spin anyway, as it will put more distance between you and your pursuer.
If you have no chance of running way, it's sometimes better to turn around, activate Undying Rage and attack your pursuer, especially if they're alone. In-turn, if they start running away, press the assault and keep using Spinning Slash to close the distance. With luck and a proper build, you'll be able to kill at least one enemy champion, and possibly even survive, if either your team helps or your enemy was alone.

Alternatively, Spinning Slash can be a great offensive weapon, if used correctly. Thanks to its rapid casting time and range, you can use Spinning Slash to position yourself, initiate ganks, and chase down fleeing opponents.

Spinning Slash is also effective against minions, as it damages multiple targets at once and generates more Fury for Bloodlust. The more enemies you spin through and kill, the more Fury you'll get.
If you're taking down a weak enemy turret and see an enemy champion moving toward you, you can use Spinning Slash to both run away and damage the turret even further. With proper timing, you'll both destroy the turret and put some distance between yourself and any possible pursuers.
Mocking Shout is Tryndamere's debuff ability. Although it doesn't help deal damage, it still has its uses, as it automatically affects enemy champions within its radius without needing to be aimed.
Keep in mind that Mocking Shout always reduces the enemy's attack damage, regardless if the slow is applied or not. This makes it an excellent ability to use in a team-fight. In addition, it can also be used during the laning phase to decrease an enemy champion's attack damage ―causing some of their last hits to fail, if well timed.

Mocking Shout is an excellent anti-jungle/ganking tool, as it doesn't need to see an enemy champion in order to affect it. If an enemy champion is hidden, but within range, the ability icon will go from grey (unusable) to colored (usable). This can be very effective when walking through an enemy jungle, allowing you to gank enemy players.

Undying Rage is what makes Tryndamere so deadly. Though the invulnerability period is short, the few seconds it buys is sometimes enough to turn the tide of battle. Try to delay its activation as long as possible, as you can still lose health while it's active. Delaying it is also a very effective way to cause an enemy champion to over-commit to killing you. It is, however, always better to activate it a moment too early than a moment too late ―while both can lead to your death, the former reduces the chance of being killed by a high damage burst.

Undying Rage's offensive application can be used to devastating effect. In addition to making you invulnerable, you'll receive a massive boost to your current Fury upon activation, drastically increasing your critical strike chance and overall damage output. Ideally, you'll want to be in melee range when you activate it, so you don't waste time chasing your opponents. Even if you don't kill your opponent, Undying Rage can force them to retreat.
Undying Rage also makes Tryndamere an excellent one-on-one dueler, as his high damage output can demolish enemy Champions. You can also activate it whenever you're being chased in order to turn the tables, and possibly even kill your pursuer.

Undying Rage can save Tryndamere if the going gets tough. If you think you're going to die, activate it, then Spinning Slash over a wall. By following it up with Bloodlust, you'll hopefully have enough health to survive any damage over time effects you currently have and enough distance to safely Recall to base.