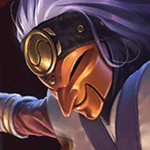 Super tanky, make sure you bully him early, and at level 6, he can kill you pretty easily.

He is basically your direct counter. He will Q you once, start spinning and you can't escape. If he gets mercs your lane is gone, he will keep spinning on your boxes, then he will touch you once and your dead. Proxy or if you can outplay him, then get full bruiser.

It's pretty hard to keep pressuring him. He's just gonna farm and get his stacks, mid game he's going to be OP. Try your best to bully him in lane and the only good thing is that most Nasus players stay in lane the whole game, so you can roam and gank lanes that are in trouble.

Just annoying. You can't auto him because he will blind you. You aren't very tanky so he will kill you.

He can't really do anything, if he walks in your boxes he just dies.

She jumps or dashes into your boxes, you win.

Shaco is supposed to be an AD assassin, mainly played in the jungle to abuse his early game and to use his stealth, mobility and slipperiness to pick off out of positioned enemies.

Shaco is an extremely fun champ to play top, but is obviously not meant to be in that position. Obviously he isn’t the best splitpusher such as

Tryndamere, but Shaco’s playstyle is the reason why some people still play

Shaco top lane, including myself. His unique laning phase makes

Shaco a very fun champion to play, but why should you play him in your ranked games? Shaco is a very strong champion, he has the ability to disengage really well, and can protect himself from behind with his

Jack In The Box to stall time for him to run. He can take down towers well with his ultimate

Hallucinate. His strong power early game and roaming potential is extremely good, so what stops

Shaco from being a top laner?
PROS AND CONS
- PROS
+ Good for splitpushing
+ Good roaming
+ Punishes greedy players
+ Very slippery and can almost never die in lane if played correctly
+ Fun champ to play as
+ Has snowball potential

- CONS
- Squishy and can overestimate his ability
- Hard to redeem yourself from a bad early game
- Bad positioning especially without abilities, can be punished
- Has trouble with revealing champs and Oracle Lens
- You have to get used to being flamed unless you get a penta in the first 5 minutes

Jack In The Box around your lane. Place 2 near river and place the rest in the bushes in lane. Check bushes in case of a cheeky laner trying to get the pick on you early before you have your

Deceive to get out of bad situations. If the laner is in the bush, run to one of your

Electrocute and will secure an easy kill.

WARNING: Care mid, because many games I have tried 1v1ing my laner, and the enemy mid laner comes up and gets the first blood on me. Mistakes like this cause you to lose the lane entirely, and can cause you to lose the game from it. You don't need to worry about the jungler, because the top laner wouldn’t be going aggressive on you like that if he was at the top side jungle.

Getting that out of the way, try to get your

Deceive second, this helps you to go aggressive early or to escape when the jungler ganks you early. You can choose to get your

Jack In The Box to lvl 2 or get your

Two-Shiv Poison if you're against an aggressive laner so you can get CS from far away. Your

Two-Shiv Poison uses a lot of mana, so be careful when you use it. Getting your

Jack In The Box to lvl 3 is good for early damage in lane.

Jack In The Box are used in many ways such as protection from the jungler, pushing/splitting lane minions and to use to engage on your laner. Max out your

Deceive first so you can stay invisible longer, meaning able to run and survive when you’re getting chased.

Mid game, you’re going to be split pushing lanes and roaming. Shaco’s roaming ability is strong, and you can get back to lane with your

Jack In The Box are used to stall time when he’s getting flanked to escape.

Hallucinate creates a clone, and take does damage to towers really well. Shaco’s roaming potential is used in ganking and teamfights. His assassin like playstyle is able to take down the ADC, and if you don’t use your

Deceive to initiate a fight, you can escape easily if you’re about to die. Shaco’s ultimate Hallucinate is used to kill a champion faster, take objectives faster (dragons/baron), disengage fights and to use as a distraction so your team can engage.

In late game you have the choice to either split push, or fight with your team. As I said before, Shaco is strong at split pushing and can escape if he’s getting in a 1v5 fight. You can almost carry if you’re fed enough, and depending on what you're building on Shaco, depends on your playstyle in teamfights.
TEAMFIGHTS
In teamfights, if you're building assassin items, try and see a squishy in an off position such as the ADC, and punish them. Taking out the ADC late game can be essential in winning a teamfight. Do not engage if they are all grouped up together, unless you're building tank and your team is with you. If this is the case, try and get in the fight, and

Hallucinate and auto attack the squishy like ADC. This will put pressure on you, and will get confused on which

Shaco to kill. This helps your team to engage and could possibly win the teamfight. If you get too low, you can disengage with your Deceive.
FARMING & PUSHING TOWERS
Fairly simple, you can oneshot the melee minions if they get hit by the turret twice, and the ranged minions if they get hit by the turret once. Items like Tiamat or Proto help farming and clearing waves easier. Use your ult to clear waves if you don't have these items, because when the clone dies, it deals AOE damage, and drops 3 mini boxes. Boxes also help in pushing waves, at lvl 1, placing boxes in the wave help you to clear the wave and to get lvl 2 quicker.
When taking towers, your ult helps a lot in taking it down. Get your clone to attack the tower. Boxes also do damage to the tower, but gets focused by the tower. If the tower it taking out a cannon minion which takes a long time, place a box down to get some bonus damage. If you do any damage to a champion, such as Tiamat, boxes, clone, and clone explosion, the tower will start attacking you. Be aware of that. Shaco's kit is so good at split pushing, he's so slippery, he can escape situations very easily with his Q, ult and W fears.
SUMMURARY
Hopefully you learn something new about Shaco and enjoyed reading this guide. This is my first guide and I tried to be as detailed as possible. I hope you will try out Shaco in the top lane instead of the jungle. He's very fun and interesting to play. Remember if you have anything to say, comment it below and I would gladly take any feedback.