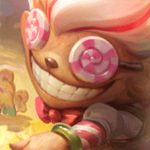 By 0kruemlmonster
READ THIS
Okay guys. This isn't a usual guide. In this guide I just wanna explain ESSENTIAL things about AP

Rakan and I want everyone to be able to read this in about five minutes. This is a guide for people that just picked up

Rakan and need to find out quickly how he works, what his abilities do, and his strengthts and weaknesses to play him properly in the mid lane. Please do NOT expect this to be a detailed guide to

Rakan where I explain every single item and rune. No, this guide is just to make you understand how he works and how to play him in five minutes. First things first, AP

Rakan is a low range-AP-assassin with great mobility.
Abilities

Rakan basically has two combos. The first one is just for small trades and to proc Electrocute:

Do you see how much burst you actually have?

A full one shot combo would be:

Rakan doesn't have the weakest early game, but not the strongest either, which is because of his high cooldowns. Yes, he has high burst, but that's it, the moment he used W, Q, AA and

Electrocute, he has to wait about 15 seconds to get his abilities back. Just focus on last hitting and maybe look for some engages when W, Q and

Electrocute are up, but after that, back off. Go roam a little bit, help your jungler at

dragon and fights in the jungle as you are a pretty strong champion in 2v2 situations and focus on getting your items.

You are pretty strong right now. If you farmed well, you should have your Core items and enough burst to oneshot squishies. Go for objectives, look for picks, focus on the game and never forget your win condition.

AP Rakan is basically a oneshot machine in the late game. If you see an enemy squishy, just run at him W, Q, AA, (

Electrocute Proc), Hextech Protobelt, dead, if not even after just WQ. Defend your carries, CC the enemy team, look for picks, get the turrets and NEVER forget that don't kills win a game, objectives do.
Teamfighting

There are three things that you can do as AP

Rakan.
1. Getting in the enemy backline, 2. engaging with your tanks or 3. defending your ADC. If you can get into their backline, you can actually oneshot two people at the same time if you hit R, W and Revolver on both of them. Your priority is to kill the ADC and get out, what works pretty good with your E dash and your Q heals you up again. After that, help your teammates, especially your ADC out and actually just spam every ability you have.
If you already have an assassin like a Zed Jungle or whoever on your team, you can let your tank (Nautlis, Leona, Maokai, ...) engage and then follow. You never want to be the one to engage first as you hate CC as AP Rakan. Charm and knock up as many people as possible. After that, get out with your E and heal yourself up again with your Q, defend your ADC and spam your abilities.
If you have a fed ADC or a hypercarry on your team, you need to play around him to win the game. Let him deal the damage and let nothing touch him or her. You have insane peel and can really help your ADC surviving.
Viable Summoner Spells

Rakan in the Rift! I hope I could explain

Rakan to you as fast as possible.