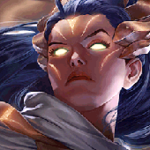 Press the Attack can also be a good option. You'll usually have to auto an enemy three or more times in order to proc

Press the Attack is just personal preference. While

Conqueror is a viable option for most bruisers, the first two options are more consistent in my opinion.

Fleet Footwork is a little too passive a rune for this playstyle, so it's a not a good choice.

Triumph is one of my favorite runes to take. It can be super clutch, being the difference between life and death in many situations. Also, the bonus 20g is a nice touch. While

Overheal can be useful when building

Blade of the Ruined King, I personally prefer

Presence of Mind is only viable for certain champions with specific playstyles, and isn't viable.

Braum, as he's melee and kite-able. However,

Coup de Grace is a very well-rounded, consistent option for any damage dealer, since it deals bonus damage to enemies below 40% Health.

Last Stand may also be useful, as it can synergize well with

Wit's End, but it's simply not as good as

Cut Down will be mostly useless since you'll be building Health.

Font of Life synergizes really well with any champion that has a lot of CC. Even though

Braum isn't being played support in this situation, it's still an effective tool to support your team later in the game.

Demolish isn't a great choice because it's best used in the laning phase, and you probably won't get the chance to use it in lane.

Braum, as he doesn't have any source of a shield.

Second Wind is a very good sustain tool for the laning phase, especially when facing ranged champions, so it's perfect for

Braum since he has a weak early game.

Bone Plating is also a great option if you're facing burst damage in lane rather than poke. While

Conditioning can sometimes be useful, it's best utilized on full tanks rather than DPS bruisers.

Unflinching is an important rune for any bruiser, as they can all make use of Tenacity. This, when combined with

Legend: Tenacity, can grant quite a large chunk of it. However,

Overgrowth can also be a good option, as you'll spend much of the early game farming and scaling.

Revitalize is basically useless, as you don't cast shields or heals, and only receive any if you have a shielding/healing champion on your team.