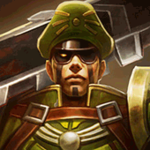 By cilium
In this guide I will go over BeNice2EachOther's build and playstyle with Hecarim. He hit rank 1 mostly playing Heca with a very specific playstyle. The guy boasts an impressive 67% winrate over 135 games.

Jungle is not my best role but simply studying this guy a few games and copying him I've already had success in games with Master-GM players:

Predator - Synergizes extremely well with Hecarim's kit and build and makes your ganks very easy to pull off. Your passive gives you AD the more bonus movespeed you have and your E gets more damage the more distance you travel. You also have Mobility boots and Ghost to stack mobility even more.
Its cooldown gets reduced by one of the other runes you choose as well (

Sudden Impact - You procc it with your E and ultimate.

Eyeball Collection - Some extra damage. Makes the most sense here because Hecarim is not a tanky jungler that's looking to control vision and can die quite easily if he gets caught so Zombie Ward is not that great. Poro is fine but is not always present. With Hecarim you are pretty much permaganking so getting stacks on Eyeball is not an issue.

Youmuu's Ghostblade - its cooldown goes down to 27s.

Celerity - Celerity recently got buffed to 10% and makes a ton of sense in this build because you are stacking a lot of movement speed buffs, Hecarim's E is also a MS buff in itself. And it also works with the other secondary rune you take - Waterwalking.

Waterwalking - It's good on Hecarim because you are looking to gank most of the time - so moving faster in river is great - it also gives you a bit of an extra oomph as you are approaching the laner you're about to gank.

Mobility Boots - They are essential to this build, you are buying them 90% of the time (exception being if enemy team is full AD (maybe) or full AP with a ton of CC. They make your ganks extremely strong.

Stalker's Blade - He prioritizes Stalker's Blade highly - after Mobility Boots. Skips even components of Trinity Force for it if he has to. I'm guessing he really values the extra burst from blue smite.

Trinity Force - It's your biggest powerspike - Trinity is exactly what Hecarim wants in terms of stats, the build path is very nice for him and you can procc Sheen all the time because of your Q. You want to get it before Warrior.

Enchantment: Warrior - You get this instead of Cinderhulk - the build BeNice2EachOther uses is very all-in and assassin-y. Warrior is very cost efficient and I think it's fair to say you are at your strongest point when you buy both Trinity and Warrior.

Youmuu's Ghostblade - Ghostblade is nice for this build - as we already mentioned - its cooldown gets reduced by Ingenious Hunter. The build path is also great - as you can get

Serrated Dirk for only 1100 gold and it's a very good powerspike. Also - more movespeed -> more damage and even easier ganks.
From this point onwards it's mostly situational depending on enemy teamcomp or personal preference. BN2EO goes Guardian's Angel,

Duskblade of Draktharr or

Last Whisper if enemies have stacked a lot of armor.

Sterak's Gage is possible if you want to be a bit more tanky against both physical and magic damage.

Enchantment: Cinderhulk is a viable option if your team has a lot of damage (a ton of assassins), you are already ahead and you really need a frontline.
The way BeNice2EachOther plays this build is very all-in like and focuses on ganking primarily. Jungle got changed recently where you get less gold and experience from camps so it makes a lot of sense as often it's more worth it to sacrifice resources in the jungle but get your laners ahead. He often skips camps completely and just ganks.
Farming camps and then ganking is generally considered to be the most efficient and consistent way to play jungle but with this build (and after the jungle changes) a lot of times it's better to go for ganks because of how easy they are to pull off. This makes you kind of unpredictable - because a lot of times people will expect you to be chilling and farming.

Red buff -> Raptors -> Golems -> gank bot/top (depending on side)
Sometimes he can also go for mid ganks if the mid champion has CC to set up the play or if it's a super free gank.

After that he generally backs to buy

Mobility Boots so he can use

Predator and either goes for a gank immediately (if there's an opportunity) or just clears his other side of the jungle. He skips camps very often.
Gromp does a lot of damage to you early on so it's not a camp you want to be doing that much. Hecarim excels at doing camps he can AOE like wolves and raptors.

If you are blue side, you can simply tell your pathing to your team and ask botlane to not push so you can gank. It's the freest gank usually because botlaners are a bit underleveled (because they share exp). As you can see in the video Nami was level 1 when I ganked.

Something else you can do on Hecarim is farm Blue and Gromp the same way Zac and some other champs can. You heal from both with Talisman. You can see me do it here in the clip:


As for how to execute ganks: you want to pop your E first and then Predator because if you Predator first, you just cancel it with your E.
Sometimes you also want for your opponents to flash first and then walk behind them and knock them in your team. Hecarim's E is generally not that hard to flash so that is something you will have to practice a lot.
You can also extend your E combo with your Ult (a bit more advanced).
Your Ultimate can also be used to dodge CC or as an escape.

Thanks for your time and be sure to check out my other guides as well!
MASTER FIDDLESTICKS SUPPORT GUIDE
LS MORDEKAISER DUO QUEUE STRAT EXPLAINED (REACHED KR MASTER)