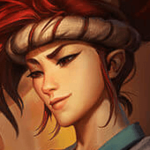 By VoltageFrog
Everything
This guide as you can see in the title is for Kotone, if that's not your name, you gots the wrong page friend.
The idea here is that you fully take advantage of Anivia's egg passive. The only thing that could be unclear is what to build
Runes

The runes chosen are pretty typical for a tank with lots of crowd control. It's pretty simple, you land a Q and your runes make you super tanky in terms of armor and magic resist stats. The Triumph rune lets you survive a lot longer in fights if your team is getting any kills, because it heals a percentage of your maximum health, which you will be increasing a lot. The Legend Tenacity rune reduces the duration of crowd control on you, which is good for staying active in a fight. (Note: suppression, stasis, knock ups, and other displacements are unaffected by tenacity)

The only difference between the tank and support tank runes is taking Font of Life over Demolish, because it helps you and your botlane parter sustain in the lane.

Armor options are for when you're against heavy attack damage teams.

Thornmail should be built mostly for when you're against a team that needs a lot of auto attacks OR a team that has a lot of healing, because of the grievous wounds effect. So if the enemy team has a fed Tryndamere, Master Yi, or fed AD carry, OR if they have a heal champ like Soraka or Sona then a thornmail should be a good item to pick up.

Randuin's Omen should be built mostly against teams that rely on critical strikes. So a team with a fed tryndamere, Yasuo, or a fed AD carry that builds crit items, then a Randuin's Omen will do wonders reducing enemy crit damage. Also the active ability helps keeping enemies from running away from you or helps keep them away from your team.

Knight's Vow is for if you want to be supporty and protect a teammate.

Both Sunfire Cape and Deadman's Plate are really solid armor/health options for general use. It's worth noting that the passive damage from Sunfire Cape does cause turrets to target you if an enemy is too close to you.

Not many of them, but should be built if against a team with lots of ability power based champions.

Adaptive Helm is a godsend of an item if you're facing a team with magic damage over time champions like Brand, Teemo, or Cassiopia. The reason you would buy this item is for the passive which reduces the magic damage of a spell if you already took damage from that spell four or less seconds ago.

Spirit Visage is pretty similar to Adaptive Helm in terms of stats. I usually buy this as a typical magic resist item, if there is no magic damage over time on the enemy team OR if my team has heal champions like Soraka or Sona.
Pure health options

Pure health options are useful in a variety of situations, but largely for dealing with champions that deal NON PERCENT MAX HEALTH true damage. So stacking health does nothing against champions like Fiora and Vayne.

Frozen Mallet you would only buy if you REALLY need A LOT of extra health. Or I guess if you need more slows, but you're Anivia so you already have a lot of crowd control with your abilities.

Warmog's Armor is a great item if it would put you either at or over three thousand health. If it doesn't then don't buy it.
Health damage options

Health damage options in general are for if the damage dealers on your team are behind.

Morellonomicon is good for reducing healing on enemies. While the item also does have magic resistance penetration, remember that for this build you're goal is to tank, not to deal damage.

Rod of Ages is a good item if you feel like you need more health, mana, and damage. Note that you should get this item as early as possible if you deem that you need it as it does take ten minutes to fully stack.

Hextech protobelt-01 is probably not an item you would buy as it doesn't give that much ability power or health. Only get this if you're really desperate

Rylai's Crystal Scepter gives a good amount of health and ability power, but the passive is a bit redundant so probably not an item you would buy.

Shurelya's Reverie is a pretty cool item, it doesn't give much ability power or health, but it also gives cooldown reduction and the active ability is pretty useful in making all nearby teammates move at supersanic speeds.
Situational options

I categorized these items under situational, because they don't permanently increase your maximum health.

Frozen heart should be purchased if you're facing a team with a REALLY fed attack damage champion or champions.

Gargoyle Stoneplate should be purchased if you're constantly teamfighing. The passive makes the item insane with the eighty armor and magic resist. On top of that the active greatly increases your health and if you're teamfighting the active even doubles your health.

Locket of the Iron Solari is an okay item as it has both armor and magic resist, but adds nothing to your maximum health. The active helps you to protect your teammates from burst damage.

Zz'rot Portal is also a pretty cool item because of the armor and magic resist. The active is really good for taking down towers.

A general guide to Anivia, The Cryophoenix
By Reason97

[10.1] Blue Bird Is The Word: Anivia Guide
By orangepenguinhead