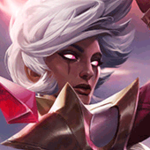 Hey!
Im Chrys, a "veteran" player since Season 2. Although I main support, I do play all roles. I have decided to write my first guide about Tank

Karma though, as I consider her to be one of the most versatile Top lane champions. Her sustain (W), as well as her ability to strenghten her team and turn teamfights upside down makes her a huge powerbank.

Phase Rush - great for entering and quitting team fights, as well as for escaping from fights.

Manaflow Band - an obvious choice, which gives us the mana sustain we need

Transcendence - as the build itself has 40% CDR, you are not going to get the 40% that fast. This should help you, while also making use of any excess CDR.

Scorch - great for poking and burning down your opponent early.

Shield Bash - helps you with trades in the lane greatly and scales well with your health/shield power items.

Revitalize - your W and E are buffed a bit by this. Plus, it can save some of your teammates.

Conditioning - Provides just a bit of resistances to top it off. Perfect after your itemization is complete.

Bone Plating - the rune is great for shutting down all-in champions.

Grasp of the Undying - if you get an easy-to-poke matchup, this rune gives you a lot of sustain, good poke, and a lot of health in the long run. I prefer

Phase Rush due to the mobility it provides, but this one works as well!

Bone Plating -all of these are great choices, depending on the match-up.

- this is the best start, as it provides some ap, hp and a lot of mana sustain.

- as an aggressive start with some ap, mana and sustain.

- for even more sustain AND a great buff to your poke early.

Sheen procs with slow, giving you a lot of time to auto-attack and cast abilities while enemies are slowed - therefore your

- Health and health regen, magic resist, another 10%CDR, and to top it all, 30% increased self-healing, what gives Tank

Karma the survivability she needs. Also, it stacks with other effects.

- I usually go for

Ardent Censer for a little bit of bonus damage and team-buffing. Especially, if you have an ADC like

Varus, etc. which need a lot of attack speed to dominate, this is the best pick. On the other hand,

Redemption is more sustain based - as the Active effect can save you, or your teammates, even after you DIE.
Both of these items have +10% healing and shielding power, which is great for your kit too. You can even combine both of those items together in your build, to be even more helpful to your team.

- I usually take those just to sell them later. Early, it gives you some CDR to get that 40% faster, and later on in the game you can sell them to get some armor or magic resist. Otherwise, if you keep them, it can give you some AP from

- Magic resist and 30% tenacity is great, as you are going to move around team fights a lot and making the CC on you reduced helps that case.

- Against heavy ad / auto-attack teams, when you want to block the 12% of auto-attacks and also get some armor for survivability.

- a great pick for health, ability power and a huge over-time buff to your damage, especially against tankier targets. Works well with your poke.

- against ad teams or auto-attack based champions.

- resistances and shield as addition to your

Inspire to make those team fights even easier.

- binding to your team's carry works well with your ability to enter team fights quickly and be in the middle of the chaos, surviving.

- the ability-block is nice, yet the new

Banshee's Veil does not provide health anymore, so now it is better when you want to pick up some damage against heavy magic damage comps.

- health and armor, critical strikes damage reduction on your Tank

Karma and some nice passive attack speed slow to anyone who decides to hit you. Active is great for chasing and can help the course of any team fight.

- health, mana, magic resist and CDR, all of which help your kit greatly. Sustain after spamming spells (and you are going to do that a lot) and the Aura is especially good if your team has a lot of magic damage. Also great against heavy magic damage teams.

- ap, mana regeneration, movement speed and an active that benefits the team? Sign me up.

- after the recent changes, it provides you with a nice burst of health-based damage whenever your W snares a target.

His sustain is great, his CC is hitting hard and later he becomes tanky enough to eat all of your damage. You can outtrade him early, as your damage is pretty high itself but he will get very beefy (unless he goes AP), so take

Liandry's Torment. Do not overpush - since

Cho'Gath can set up ganks easily. Make use of

Phase Rush as much as you can, so you won't get caught in his abilities.

I am not as certain about this one, yet considering all the games I have played this matchup in, I do not feel like it is a hard one. Poke whenever she tries to farm and stay behind your minions, so she will not be able to use

Test of Spirit on you. With your movement speed from

Illaoi players usually try to defend those, if they are nearby.

The matchup got better in the recent patches.
Deny his farm, poke whenever possible. If he starts a fight with you, your spells should be enough to lock him down and along with

Phase Rush, it is nearly imposible for him to lock YOU down. He outscales you in the late game but still, your sustain and protection is way too much for this guy to handle.

Most of the time, she will try to dodge or negate your

Inner Flame with her

Valor, yet our Q has 3 seconds shorter cooldown, so abuse that.
A good

Riven player will not recklessly fight you head on before getting an advantage.
Early, use your poke as much as you can after baiting out

Valor with your autoattacks.
Whenever she tries to run up you pre-6, you can simply use

Inspire to negate damage and

Focused Resolve to lock her down, followed by

Inner Flame combo.
You should have the upper hand when she hits level 6 and dominate the lane with your

Focused Resolve heal whenever she decides to burn you down with her ultimate. If you anyhow fell behind, just can always ask for the help of your jungler whenever you let her push.

He cannot outtrade you early and you can punish him for every minion he tries to take.
Use

Inspire whenever he throws

Mega Adhesive at you to get out of it and continue to poke and slow him whenever he tries to walk up to you. Abuse your

Inner Flame early and save your

Focused Resolve in mid game - when

Singed uses his ultimate you can easily escape after rooting him and heal up. You will be able to push him under the tower early and mid game, so get a

You cannot go wrong here, as the kit

Trundle has is not going to endanger you, if you keep distance from him and poke.
Whenever he uses

Frozen Domain to speed himself up and

Pillar of Ice to stop and slow you, you can just

Inner Flame to slow him and

Inspire to speed yourself up - resulting in one-sided trades in your favor. Do not overpush too far, as jungler might screw your advantage up.

Even though I believe you are to have the upper hand, he can be a nuisance later on. There are many

Yasuo mains and he has a high pick percentage, yet a good

Yasuo is hard to find nowadays. Trade-wise, you should start the trade with

Focused Resolve, as it often baits out his

Wind Wall, but it does not stop you from snaring him, as your

Focused Resolve is not a projectile. Without the windwall, it is easy to poke him out with autoattacks and your

Inner Flame. Beware of the enemy jungler though, as he might want to help

Yasuo get fed. Do not underestimate his scaling, as your damage falls off. Get

Ninja Tabi to reduce his damage output against you and

Swain depends heavily on his skillshots (and soul fragments) and you are mobile enough to not only dodge them, but also counterattack and win trades.
Early, your poke is just far better and your CC is far more reliable, as your

Focused Resolve is a single target spell. Later in the game,

Swain can be a hard one to fight against, so get a lot of magic resist.

Morellonomicon is a great choice against him.

The thing with this big guy is that most of his power comes from prolonged fights, where he can make use of his passive. Even if getting crushed in lane, he can get it back with just a little bit of underestimating in team fights. With that said, your laning phase and team fights should be focused on making him hurt less by zoning, kiting and making sure he does not get to you and your team for free. Everything comes to your positioning. Whenever he wastes his

Apprehend (which has a huge cooldown), poke him down. Also, stacking health items works well against his true damage from

Karma at all, yet I am meeting a lot more

Iron Skin have been removed,

Karma got some changes. Her starting armor got buffed, that benefits this build greatly! Early, her mana sustain is better and her inner fire has a bit bigger explosion radius now / even tho combined with

Scorch has half the damage now, the cooldown was also lowered to 10s, what benefits our poke-based laning even more.
//20th November 2018
-8.23 already and the build is still very viable.

Karma has been buffed few times, and the new rune

Shield Bash is great with this playstyle. Looking good!
-I also want to apologise for not updating the guide through the last few patches due to lack of time. I will probably update the guide slightly every now and then.
//10th December 2018
-minor chapter updates, 8.24 changes did not affect this build.
//5th February 2019
-the build is still very viable and the last few patched helped it too. For example,

Forbidden Idol got buffed, both being used in the build
//18th February 2019
-none of the changes affected this build, plus some of the matchups (

Irelia) are somewhat easier now, after the nerfs.
//12th June 2020
-After more than a year, I decided to come back to the guide and I will try to update it as often as possible. The build is still not only viable but also very rewarding in current meta!
//29th June 2020
-removed outdated info

Looking forward to your feedback!