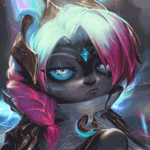 By electorch
Hello all Kindred Mains!
Hello beginner hunters! I am an NA Kindred Main, learning Kindred as a first champ. I mainly play Kindred ADC over jungle but playing both roles. Kindred can be a 1v9 late game carry champion giving safety, mobility, and range with one of the most unique ultimates in the game.

(this is a fairly early draft of the guide so its very unpolished, sorry in advance ^^;;)

Lamb's Respite Information & Uses
Important Knowledge to play Kindred
Before we get into the spells and synergies, we need to know about basic knowledge.

Dance of Arrows Auto Attack Reset
Auto attacks in league of legends have internal timers on how often you can Auto Attack (AA). Using

Dance of Arrows(Q) resets that internal cooldown, letting you AA after the animation of

Mark of the Kindred
Kindred features a UI above your items. Lamb and Wolf both applies marks. Lamb marks enemy champions and Wolf marks enemy jungle camps/epic monsters such as

Wolf marks enemy jungle camps periodically. Wolf marks camps based on how many stacks you currently have (including lamb's acquired marks.

This should be the combo to use in the start of the fight. If you're jungling, you can start the combo with

Challenging Smite instead of an (AA); or

(E)
Kindred's Itemization
Kindred is a very flexible champion, having itemization options for every game. We will be going over the different items kindred should build in different situations.

All items should be prioritized depending on the game. Always build based the game's situation.

Blade of the Ruined King aren't amazing on kindred, while still viable. Try to avoid on-hit builds if possible. However, build what you have fun with as a general rule of thumb.

Overheal is a waste as

Presence of Mind are better choices.

These runes are highly situational. We will go over when to take these.

ADC Support Synergies
This chapter will talk about kindred's support synergies in the bot lane.

We will mainly see 3 types of support champions.

Pokers
These supports keep you safe while farming. They should poke the enemy to keep them a safe distance away from you while you farm.

Engagers
They will use a form of CC to get a good trade. When they hit a CC, you should engage and trade with the enemy.

While some supports are better than others, every support is playable with kindred with their self-peel. Its mainly knowing when to take fights and not.

Summoner Spells
As a jungler, you should always be taking

Smite. We will go over the necessities of

Flash. You should always be thinking about taking

Smite. As an alternative,

Smite; though should be rarely used.

As an ADC, you have more of a variety of options. However, you should be thinking about taking

Kindred thrives at level 3. You should always look for a fight when you reach level 3. When jungling, do a three camp clear of

Gromp . This should result a clear time before 3:15. During this time, look for a gank, or invade. If you're invading, try to utilize

Wolf's Frenzy's vision over walls and use

Dance of Arrows to hop over walls.

With laning, always try to get level 3 before the enemy. Get the level advantage over the enemy and go all in at level 3, doing the combo in the earlier chapter. If coordinated well, this could lead to an easy kill or a really good trade.

You have to stay mana conscious in lane. Try to use

(Q) conservatively, only using it to disengage in trades and stay safe in lane. If your xp is close to level 3, clear your current wave and get level 3 before your enemy. You are the strongest at this stage of the laning phase.

This guide assumes you know the basics to jungling. A great jungling guide can be found here. The guide will be updated with an image of kindred's pathing this stage of the game. Kindred doesn't require a leash, but is still highly preferred. You want to start with red buff normally first, beginners can start with a bot leash, meaning you will start on the buff on the bot side. If you're starting on

but not losing camp patience. If you're getting a leash, try not to kite to keep the leasher's health topped up. When they leave to farm their lane, start kiting towards blue side jungle (

Blue Buff), smiting when the buff is at or less than 450hp. You should get level 2 off of that camp. After completing the buff, go towards

Blue buff, using the blast cone. Do the combo (AA)>

(W) and then clear the camp as normal. Use the wall in the Blue buff camp and kite around the wall to stay as healthy as possible, clearing

Gromp after clearing the Blue buff, which should result in a clear time before 3:15. Use this time to decide to invade, gank, or clear

Rift Scuttle will spawn at 3:15. There is a 50/50% chance for your mark to spawn on Top scuttle or Bot scuttle. There is No way to predict which crab the mark is going to spawn on.
Early-Mid Game
Playing ADC

Keep playing safe in lane unless you're really fed. While your main source of marks are from champions, you can grab a mark from a

Scuttle Crab in the bot side,

Blue Buff by earning a takedown on that camp within 6 seconds before death to an ally. Be careful of your state of the lane, enemy laners' wave clear, and jungler position to ***es whether or not it's safe to take a mark. While your auto attack range is not bad at this stage of the game, having 4

This is the part where most kindred players get undetermined. It's arguably the hardest part to learn on kindred. Skills required to play at this stage of the game is to: While none of this is "required to know", it's still very helpful to know and dedicate learning if you want to play kindred seriously. Based on these information, you'll figure out which camps are safe to take to earn

marks from. This takes a lot of practice and time to get down as second nature.
Late-Mid Game
At this stage of the game, its expected that towers have fallen. Its at this stage where its decided if you've won or lost lane. As a jungler, you should keep following Early-Mid game chapter.

Play like a normal ADC at this stage of the game. Roam to help your jungler or mid laner to help influence the other lanes. With your relatively high mobility, you can quickly leave and get back to lane.

At this stage, you'll be getting into more team fights. It's very important to know when to

ult or not to. This takes time to learn but the best way to decide when or when not to ult is to think if you win the fight, or not.
End Game
At this stage of the game, kindred both ADC and jungle play similar, if not the same.

Go to marked camps (making sure its safe to clear) to get easy marks. You can always ask your team to help secure a mark safely. Play safe in the back line. You have the ability to save teammates or turn teamfights with

Lamb's Respite. However, its a double edge sword; as it works on the enemy as well. Learning how to use

(R) correctly takes experience to learn. It's not easily explainable in a guide form. Play normals and learn to make your own judgements on when to use

(R).
Closing Notes/ Extra Resources
This guide will be updated as its being worked on! Please hang in there with me! If you have any question on our eternal hunters, feel free to reach out to me! Kindred is a hard champ to get into, but can pull some rewarding plays. If you ever feel stuck, my best advice is to VOD review. Makes notes on your mistakes and best plays, see how you can improve your plays as you can always improve at any level. If you want more guides or just want Kindred Personalities, check out Forest Within (200 years guy, informational), Godly Polo(more chill, fun to watch and interact with) both NA English players.