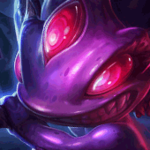 In previous seasons, cookie-cutter builds; building the same items game after game was staple for many champions including Fizz. This brought a lot of issues to assassins like Fizz, as versus certain team compositions you were doomed for failure. However, the introduction of Mythic Items in Season 11 has brought many opportunities to champions like Fizz to strive. Fizz now has options versus tanks, duelists, and of course, squishies. Getting to know what situation calls for what build path is crucial if you want to not only learn Fizz, but effectively improve as a player.

FIZZ, THE TIDAL TRICKSTER
Fizz is an AP melee assassin who relies on his mobility and burst damage to outplay opponents. His versatility allows him to adapt to different situations as he playfully jumps in and out of team fights.

After familiarizing with Fizz's skills, check out these combos that can be utilized in different situations throughout every game.

Matchup guide will update periodically throughout season 11 as I get gameplays and post them on the guide. Only the most frequently asked matchups will be covered for the early laning for now.

Your objective as Fizz is to eliminate the enemy team’s squishy damage dealing threats. Utilizing your abilities, flanks, vision, and high damage/mobility will allow you to easily do so. If you determine that your backline is extremely strong and can carry, look to play front to back with them, rather than diving the enemy squishies. Determine your wincon and play accordingly.

Freezing the lane as Fizz can be an extremely useful tool to both deny xp/gold and eventually force pressure and/or kills. Given enough space, Fizz can all in or kill many opponents by keeping the wave in a favourable spot near your turret.

Consistently being able to perform in teamfights on Fizz can be a major factor in your success in many games. However, straight up teamfighting on an assassin like Fizz is not ideal. The strong suit of melee assassin's is diminished in a 5v5 scenario. In this section I will go over the workarounds to teamfights, and how to play out teamfights if absolutely necessary.

A concept that is important to be aware of on Fizz is the ability to mix up E timings, making yourself unpredictable. The ability to either hold your E or reactivate your E (at different timings) to do a faster version is important as you get better at Fizz and start being able to read your opponents reactions, and adapt accordingly. This becomes even more variant as you can

Flash + E, making it difficult for your opponent to predict. The variance increases if you build

Spacing and movement is often overlooked when talking about melee assassins. Though it is subtle, it is an important factor to mention.

Understanding the concept of vision and where vision is likely going to be is often overlooked, but is very important at this stage of the game for assassins like Fizz. You want to be able to force plays that either the enemies don’t expect or cannot reasonably react to. You want to know if the enemy will be ready for you to look for a play. Generally, I like to break this up into two categories when conducting the mid game: vision when ahead and vision when behind.

I want to thank my girlfriend, Vivi, for helping me edit and format the guide.
We spent countless hours working on this project together to make the guide the best it can be!
💜 Thanks VIVI! 💜

Spoiler: Click to view
- Included change log for updates and any other changes we need to make in the future.
- Changed formatting of Lane Matchups by including dividers, bolded champion names, skills, and items.
- Updated text for Zed and Kassadin in Lane Matchups.
- Updated bold text colors for champions and items in Concept & Goals and Advanced Tactics.
- Updated teleport description under summoner spells

Note: Previously changed the Items quick tips for a cleaner look. Text in Situational Purchases and Understanding Mythics were updated based on buffs and nerfs of different items. Went through half the guide to change the bolded text color for enemy champion, enemy champion skills, and items. Don't really remember the date of change so including the log here. Thanks so much for the reviews and tips on improving the guide!!